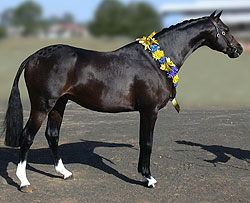 Champion Riding Pony Stallion, Tom Kitten is an eye catching pony with four white socks and a fine blaze. He has a great temperament and is a delight to handle in every way. Tom Kitten is educated under saddle and has exceptional movement for such a small pony. His sire King Lodge Jeremy Fisher is by the influential import Janinos Little Joker (IMP) and is out of the imported mare Hamptonne Heaven Sent (IMP) who is sired by Keston Tribune. On his dam�s side he carries the blood of the great Big Hat (GB) who was a prepotent sire of hacks and performance horses.

From only 6 named foals, his only shown offspring, Farleigh Pippin, is a multiple champion. Most excitingly he has been used over thoroughbred mares with great success and we look forward to the resulting progeny performing in the show ring.