With more than thirty years of experience breeding horses, Farleigh was the vision of stud principal Deborah Bell. Set amongst 3000 acres of New England’s picturesque rolling hills at the headwaters of the Saumarez creek, and only 15 minutes from the university city of Armidale, the operation originated as a racehorse and performance horse stud.

The stud enjoyed success in many disciplines with showjumpers and eventers sold to New Zealand and Japan and several hacks across Australia. Through Olympian Mrs Bud Hyem, thoroughbred Big Hat(GB) was acquired- a superlative hack sire. He joined the lovely Some Lute(FR).

In the mid-1990s a decision was made to infuse preeminent pony bloodlines into the stud with the aim of breeding horses and ponies with the finest looks, conformation, movement and temperament.

In 2005, the stud imported superb colt Trellech Enigma (imp) bred by John and Carol Gould. He is passing on his looks, elegance and height, which should come as no surprise as he is by the supremely successful Cusop Fingerprint and out of the lovely Trellech Spirit of Spring a British National Champion at two years, who is related to HM the Queen’s TB Sanbal. Trellech Enigma (imp) is the only stallion by Cusop Fingerprint in Australia.

Seven years later, another trip was made to the UK where the exquisite Howetown Dreamcatcher (UK) was acquired. A stunning 15hh black colt, Dreamcatcher is the only Riding Pony in Australia by the hugely successful 14.2hh stallion Stanley Grange Royal Appointment. Appointment is a young stallion himself, sired by Small-land Maytino, and out of Stanley Grange Joyride. Renowned for his exceptional quality, his progeny are beautiful types with free-flowing movement.

Stanley Grange Royal Appointment was twice Hack of the Year at the British Show Horse Association championships and a consistent winner on the county show circuit. His young stock have won countless championships, are regularly contending Cuddy qualifiers and are now making their names under saddle, attaining many titles.

Dreamcatcher’s dam Trellech Chantilly Dream is unbeaten in her class. She is a superior quality and correct mare whose show record speaks for itself as one of the top show mares in the UK. She is by Trellech Royal Ensign and out of Chantilly Silk – a mare who has consistently bred champions that have been highly successful for Trellech Stud.

Farleigh is thrilled to have secured Howetown Dreamcatcher. After more than two decades of proven breeding, this superb new colt represents an exciting future for the stud. His imported bloodlines are exclusive to Farleigh and he should have a major impact on 14.2hh Riding Pony breeding throughout Australia. 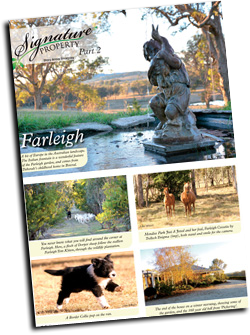 Recently our property was featured in Horse Deals Magazine, please click on the  image to read 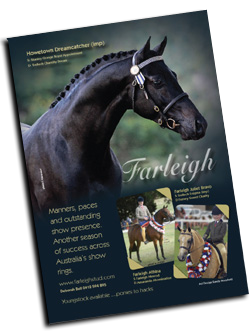 Recently Farleigh Stud featured in the Riding Pony Annual, click on the image to read